Building A Culture Of Appreciation: Owens Corning’s Approach To Developing Talent was originally published on WayUp. 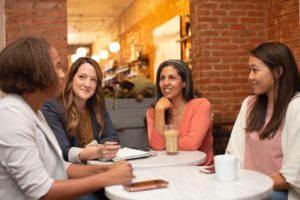 Employee resource groups, or affinity groups, are membership organizations within a company that are dedicated to connecting employees of all seniority levels who have common interests and backgrounds. They’re also a great place to learn about different cultures and participate in engaging discussions.

We asked a few Owens Corning (OC) employees about their experiences, and how OC is helping them stay connected and advance in their careers.

Logan joined Owens Corning full-time shortly after graduating from the University of Toledo with a degree in Finance and Professional Sales. One thing that brought Logan back to the company was the company’s culture.

“It’s a big company with a welcoming and small company feel,” she described. “I believe we have the freedom to explore, learn and develop here.”

The Women’s Inclusion Network at OC has played an important role in Logan’s career so far. As a member of the WIN’s sales board, Logan has been able to strengthen her leadership skills and network with women and other leaders beyond the opportunities she would have in her current role.

“WIN hosts a lot of networking and programming for its members focused on building a personal brand,” she said.

Logan’s role in the company’s Inclusion and Diversity recruiting champions provides the opportunity for her to share her experiences with potential employees, letting them know there’s a place for them where they can bring their whole, authentic selves to work every day.

“The more diverse thinking we have in our organization, the better we will be as teams and a company,” Logan said.

Her advice for students interested in working at Owens Corning is to look at the different ways the company affects the world. “We’re a large company at the forefront of innovation that feels very human and welcoming. It’s been a great place to start my career and plant roots.”

Steadily climbing up the ranks over the last decade, Lucas Ghaemi’s story with Owens Corning is an inspiring one.

Lucas Ghaemi has always been driven to lead his peers. Whether it was early in his career while he was studying and discovering his passion for engineering, or first getting his start in the field, Lucas knew what he wanted to do.

Lucas, or Luc as his colleagues call him, graduated from Michigan Tech with a degree in Mechanical Engineering and began his career in the experience engineering industry. Shortly after, he started his career at Owens Corning where he’s been for the last eight years. Luc was delighted to find people he could relate to in roles for which he had aspirations. To his further delight, these colleagues were readily available and wanted to help Luc achieve his goals.

The topic of employee resource groups came up naturally in WayUp’s conversation with Luc. He spoke of them as critical resources, adding that the groups were positive influences on his experiences with Owens Corning. As a leader on the steering and outreach committees for the African American and the LGBTQIA groups, Luc has objectives of his own that he hopes will benefit new and current employees, just as they benefited him.

“At the end of the day, it’s not just about gender, race, or orientation, it’s about everyone feeling welcome no matter who they are, how they think, or what they do.”

After being an intern at Owens Corning in the summer of his junior year in college, Austin Rosalez decided to join Owens Corning full-time.

Austin’s first impression of the company culture was that the employees were welcoming and engaged. He also liked that the company was dedicated to developing employees.

Austin joined Owens Corning full-time in the Finance and Accounting Leadership Rotational program after graduating with a degree in Finance from Miami (OH) University. He did rotations at OC ranging from customer-facing sales to corporate. This has given him a well-rounded view of what the company is all about.

His experience in the WIN group has provided a unique perspective. “It’s informative, and it helps me empathize with my fellow employees,” he said. “I enjoy the different avenues to stay involved and affect change.”

“The company puts a lot of emphasis on where they are today and where they want to be in the future through commitments and action plans,” Austin said. “It will be exciting to see what the future holds.”

His advice for students interested in joining the Owens Corning community is to, “Be curious, ask questions, ask for help and make an effort to get to know people.”
If you’re interested in learning more about Owens Corning and its current opportunities click here.

The post Building A Culture Of Appreciation: Owens Corning’s Approach To Developing Talent appeared first on Job and Internship Advice, Companies to Work for and More | WayUp Blog.